The future of media

As anyone who has watched the hit HBO series Succession will know, media companies must relentlessly innovate, if they are to survive at all. To assess this rolling revolution, Professor Alex Connock has published a book with Routledge this week, ‘Media Management and Artificial Intelligence: Understanding Media Business Models in the Digital Age.’

Here are four of the top observations.

“You need to disrupt yourself – before your competitors do.”

Steve Ballmer, then CEO of Microsoft, said of the 2007 iPhone launch:

“That is the most expensive phone in the world, and it doesn’t appeal to business customers, because it doesn’t have a keyboard.”

Indeed, entire media sectors have already been reshaped or vaporised by digital.  Cinema, newsprint, magazines, books, business publishing, home video, DVDs, airline magazines, commercial radio.  And this is not going to stop.   The best companies know that one major miss (like Blockbuster Video not embracing streaming) may cancel their raison d’être.

So what are the trends that media companies need to conquer ?

Natural language processing will drive universal translation, opening up the internet to the 3 billion people whose first language is all but invisible online. Computer vision will enable automated video-to-text interpretation at scale, and production workflow will radically change; editing will be faster, or even automatic.  Distribution algorithms will facilitate ever more targeted content provision of content to individuals, especially within streamer-owned walled gardens which gain data collection permissions at enrolment.

In media creativity, since AI agents are trained on real-world datasets, disputes will proliferate around content ownership, with multiple parties able to credibly claim input. Court cases will revolve around whether synthetic content is owned by any one of four possible parties: the source of the AI training data, the algorithm creator, the algorithm funder or the human artist (if there even is one.)

Production will turn on its head.  Movies will be created in game engines and virtual studios before a frame of footage is even shot, meaning that the clapper board for ‘take one’ will be closer to the last stage of the content production process, than the first.  (This is already the case on large virtual studio productions like Disney’s The Mandalorean or HBO’s House of the Dragon)

(2) Primacy of IP grows with technology solutions like NFTs

Intellectual Property will remain core to value creation in all media sectors.  But IP will be iterated across new platforms, and monetised in different ways – subscription, in-game ads, in-game purchases, live events, Metaverse events and social-driven ecommerce.  IP ownership will remain the most dependable equity driver for media businesses, and with blockchain may become more transparent, harder to infringe, and more valuable.

The arrival of NFTs (non-fungible tokens, unique digital assets underpinned by blockchain) can tilt the balance of copyright identification, and therefore monetisation, towards the content originator  This could dynamise creativity, putting money in the pockets of artists worldwide.   Because seven in 10 adults pay for digital content each month, a total of $300 billion annually – which means the market is available.

(3) Star power increases, but synthetic voice and video complicate it

Stars have leveraged increased demand, by owning their own rights through production businesses, then selling them, based on the expected cash flow from partially unknown future projects.  Reese Witherspoon sold production company Hello Sunshine to private equity investors for a reported $900 million, with only a limited catalogue of historic rights.

Meanwhile AI systems will expand and complicate star exploitation in the near future, with IP and ethical issues around their image usage unsolved.  AI was used to de-age Robert De Niro in the Netflix drama The Irishman by the George Lucas company Industrial Light & Magic, by scanning thousands of images of his younger face.

AI will be used to bring stars back from the dead for new roles, with creative, ethical, legal, taste, copyright, financial and other issues yet to be solved. James Earl Jones has licensed his voice to be synthetically recreated for Darth Vader forever.

Globally, differential media growth rates, will change the balance of media we see away from the US and UK.  In 2020, in Africa and Middle East, content spending grew 46.3% to $2.8 billion.   In Asia, content spending grew 19.8% to $27.7 billion with expansion of film production and streaming.  The Chinese cinema industry was in rapid expansion with home-grown product, at the same time as Western cinema chains faced potential bankruptcy.  And Latin American content spending grew 32.9% to $5.2 billion.

Equally important, globalisation of streamers and their need for audience growth outside the saturated US market is driving local content growth, which then intermittently achieves success globally, changing cultural perceptions.  This will benefit content makers in Africa (Mitchell, 2022) and South Korea – where even before breakout hit Squid Game, Netflix committed a $500m investment in new shows in 2021 for its 4 million subscribers.

With every entry of a new entertainment culture into the mainstream global zeitgeist, international cultural understanding can potentially grow.

The dial will not be turned back on democratisation of media production.  Owning a smart phone with a 4k camera capable of creating movies good enough for cinema transmission, an increasingly large segment of the world’s 7.75 billion people will continue to grow into semi-professional creator roles.  It remains an extraordinary sociological shift that billions of people can now produce, disseminate and even monetise content (including with ecommerce) without any professional mediation.

Live social commerce is growing fast in China, with two shoppers in three saying that they had bought from a livestream in the past 12 months.  “In 2020, the first 30 minutes of Alibaba’s Singles Day presales campaign on Taobao Live generated an impressive $7.5 billion in total transaction value,” said a McKinsey report in 2020.   On a single day, social commerce streamers Li Jiaqi and Viya generated $3 billion of sales in October 2021.

As we think about the media business, the marriage of intelligent technologies with the virtues of a circular economic model will become ever more important. 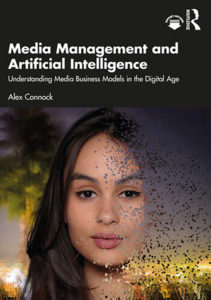 Dr Alex Connock is Professor of Practice in Media and Artificial Intelligence at the University of Exeter Business School.

Environmental challenges and the role of technology and innovation

Professor Alexandra Gerbasi, Executive Dean looks at the role that technology and innovation plays in helping to solve complex environmental problems, and highlights some of...

Every business is show business

Dr Alex Connock is the new Professor of Practice in the Business School, in Media and Artificial Intelligence. He argues that changes like streaming and...

Harnessing the power of technology in a changing world

We can help your business to sustainably harness the potential of technological transformation.

Contact us to discuss how we can help your business

If you would like to contact us to discuss potential study options, research partnerships or other collaborations then please complete the form below and we will be in touch.